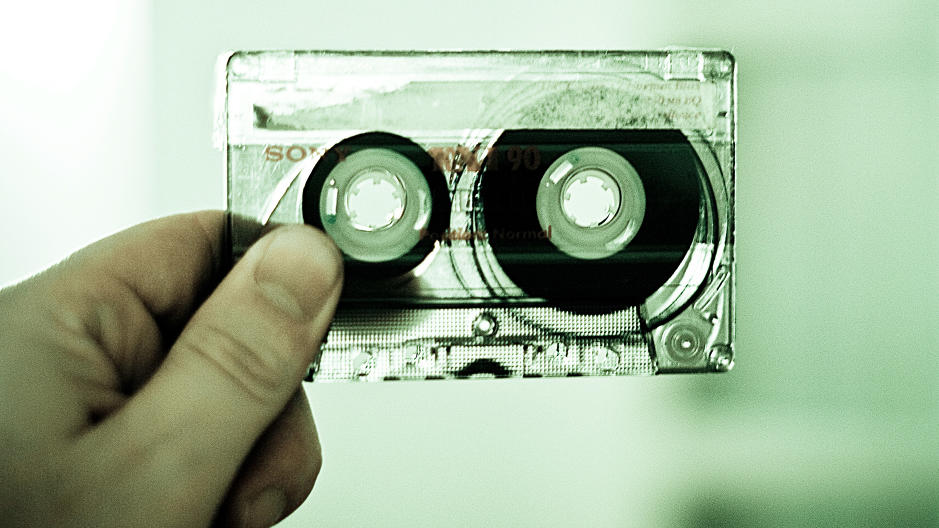 JOHN PAUL TITLOW 12.1.17
For Andy Molholt, there’s something oddly special about hitting play on his boombox at the beach. The Philadelphia-based musician tours frequently with his band Laser Background and, between that and the many shows he helps book back home in Philly, he winds up seeing a lot of bands perform in bars, basements, and warehouses. If he likes them, he usually buys a tape.

“It’s nice to only be able to listen to what’s in front of you, instead of having the entirety of music at your fingertips with Spotify and all that,” says Molholt of his growing tape collection. “There’s also something warm and fuzzy about tapes to me, maybe in a nostalgic kind of way.”

He’s not alone. Over the recent holiday shopping season, U.S. artists and labels saw a 140% increase in tape sales over the previous year, according to a new music industry report from BuzzAngle. Over the course of 2016, Bandcamp saw its own 46% increase in cassette sales, according to a spokesperson for the music service. And while it’s still a tiny sliver of overall music consumption—and too small for Nielsen to care enough to track—the seemingly counterintuitive revival of cassettes shows no sign of slowing down, even as streaming music subscriptions explode. But why?

As tempting as it may be to dismiss cassettes as another display of analog hipsterism, the mini-trend has very real, practical benefits for budding artists like Molholt, who releases music on a tape-only label called Endless Daze. For one thing, they scratch a simple economic itch. For about $2 apiece, tapes can be produced in small quantities much more quickly than vinyl records, whose own resurgence has slammed pressing plants with so much demand that a new record can take up to six months to turn around. And unlike with vinyl, musicians can produce new copies of cassettes in their apartment in a pinch.

“You can’t quite put your finger on it. But they’re sort of fun. They’re weird little tchotchkes.”

For newer, less established artists, tapes are also a lower-risk investment than vinyl: If your debut EP doesn’t sell, you’re not stuck sitting on a heavy box of vinyl that took over a thousand bucks and half a year to produce.

Tapes give musicians an affordable way to sell their work to fans—usually for about five bucks apiece—and help cover their costs on the road in an age when streaming royalty checks will barely fill up the gas tank. They let fans support their favorite artists without the $25 commitment of vinyl or some other trinket emblazoned with the band’s logo. It may seem odd given the scarcity of cassette players in our lives, but if nothing else, a rectangular hunk of plastic can serve as a convenient vehicle for a free digital download of the album. Plus, it’s a souvenir.

“For the fans, there’s a certain coolness about tapes,” says J. Edward Keyes, Bandcamp’s editorial director and a longtime music journalist, who has amassed close to 500 cassettes. “You can’t quite put your finger on it. But they’re sort of fun. They’re weird little tchotchkes.”

Indeed, the appeal of tapes has more to do with collectibility and nostalgia than it does with convenience or sound quality. In fact, the lower audio fidelity of tapes is seldom seen as a disadvantage.

“Tapes were biggest mostly in noise and hardcore, where the fact that they were degraded was almost kind of an asset,” says Keyes. “Because it made it sound muddier and screwed with the dynamics and the sound in an interesting way.”

Molholt, for one, loves the sound of tapes. “I feel like everyone is obsessed with super high fidelity but I like it when things are warm and warbly,” he says.

The tape revival is not a new trend. After being swiftly crushed into obsolescence by the rise of the superior-sounding compact disc in the 1980s, the U.S. cassette market started seeing a miniature revival of sorts about a decade ago, driven at first by underground and more experimental music scenes and then by more popular flavors of indie rock. By 2010, the so-called “cassette revival” had landed on the radar of mainstream media outlets like NPR and the Boston Globe, leading to an ongoing resurgence in interest from everyone from Pitchfork and Rolling Stone to Forbes and (hello) Fast Company.

All along the way, the return of cassettes has seemed like a strange, low-fidelity fluke in a world being overtaken by music streaming services. But even as paid music subscriptions have approached the 100 million mark, offering new signs of industry growth as physical albums continue their years-long free-fall, the cassette tape refuses to die.

In large part, we have in-the-know music obsessives like Molholt and Keyes to thank. But in recent years, we’ve seen tapes inch toward an unexpectedly mainstream sort of hipness, complete with Urban Outfitters selling tape players and used cassettes. That retailer, which produces its own limited-run mix tapes for promotional purposes, declined to comment for this article. But suffice it to say that its stamp of approval makes the tape trend officially “cool” in the eyes of many millennial consumers (even if it elicits a groan from punk bands and noise artists who have long embraced the format).

Since 2013, music retailers have also celebrated Cassette Store Day with special tape releases, hoping to extend the success of Record Store Day to a less popular format. To some, these music-buying holidays are a cheesy gimmick. To others, anything that will get consumers to pay for music, 15 years after Napster, is worthwhile.

Major labels have taken note. The 2014 release of the Guardians of the Galaxy soundtrack on cassette may have been a somewhat clever marketing tactic for the movie (whose storyline features a mixtape filled with throwback hits from the ’70s and ’80s), but there’s no such rationale to explain why Justin Bieber, Eminem, Macklemore, and Twenty One Pilots have put out tapes in the last year or two. But again, whatever it takes to get people to pay for music.

“I do arch an eyebrow when I see major labels putting things out on tape,” says Keyes. “That, to me, is just purely cashing in on what they perceive as kind of a trend. To me, tapes are really for smaller bands and record labels. Not because Columbia wanted to reissue the Top Gun soundtrack for the hundredth time. Something about that is a little more bogus to me.”

Keyes now has a routine habit of buying tapes at shows or, quite naturally, ordering them online from his employer Bandcamp. At the Latinx Punk Festival in Brooklyn last summer, he bought tapes from many of the bands he saw, who hailed from all over the world. The fact that they all sold cassettes allowed him to easily collect their music for later listening, something that would be cost-prohibitive with vinyl and downright annoying with streaming services.
ONE TANGIBLE THING
In an age when most music exists on the boundless, only somewhat navigable reservoir of sound called the internet, splintered across streaming services, YouTube embeds, torrents, and message board threads, there’s something to be said for the tangibility and simplicity of physical media. Like reading a book or a paper magazine, listening to vinyl or cassettes pulls us out of the digital ocean for 45 minutes or so and forces us to focus on one thing. What a concept.

As a bonus, Keyes notes, cassettes often look cool. “They usually do such a nice job with the cover art, especially [tape label] Orange Milk,” he says. “They have such a clear aesthetic and design. It kind of makes you want to buy them all and line them all up.”

Trendy as they may be, nobody is predicting that tapes are going to explode into a dominant force in the music industry. Not even vinyl, which has been growing in popularity for several years, has a chance of reversing the inevitable trend toward the all-you-can-stream, subscription-based music economy. But don’t expect cassettes to go away anytime soon, either.

“I can’t predict whether it will make mainstream inroads,” says Keyes. “But as a viable method for artists to put out music in a physical format, I wouldn’t be surprised to see it grow.”